The standard F2 model is equipped with simple and sturdy mechanical and driving-dependent dosage. In practice, this means that the application rate is continuously and automatically adapted to the forward speed without using electronics. With the help of the hydraulically operated dosing wheel, the tractor’s PTO need not be switched on and off when turning in the headland, which is very user-friendly.

The F2 is also supplied as standard with “A” discs for spreading commercial fertiliser, a SPC4500-1 spreader unit with 24-36 metre edge gear for headland spreading. Alternatively, 12–28 meter headland gear can be selected instead.

Simplicity is incorporated into the F2. Spreading blades should not be changed or adjusted regardless of whether they spread over 12 or 36 metres.
The dosage takes place with a belt, which means that there is only one dosage table for all fertilisers that are spread.

Bredal’s F2 models are available with hoppers either painted red or stainless steel.

Fertilizer spreader for a tractor

Bredal’s F4 is constructed with two separately controlled belts so it is possible to spread different amounts on the right and left sides. The belts are driven by an oil motor which is regulated via a proportional valve.

In the downlink control software, an automatic flow correction is built-in, so that the down position automatically adapts to the amount of the current seed. This means in practice that no changes occur in the spreading pattern, regardless of whether the run involves a small or large quantity.

The downstream electric motors are made of plastic and stainless steel and are well protected by shielding.

All movable parts of the tailgate are made of plastic or stainless steel, which in practice means minimal maintenance. 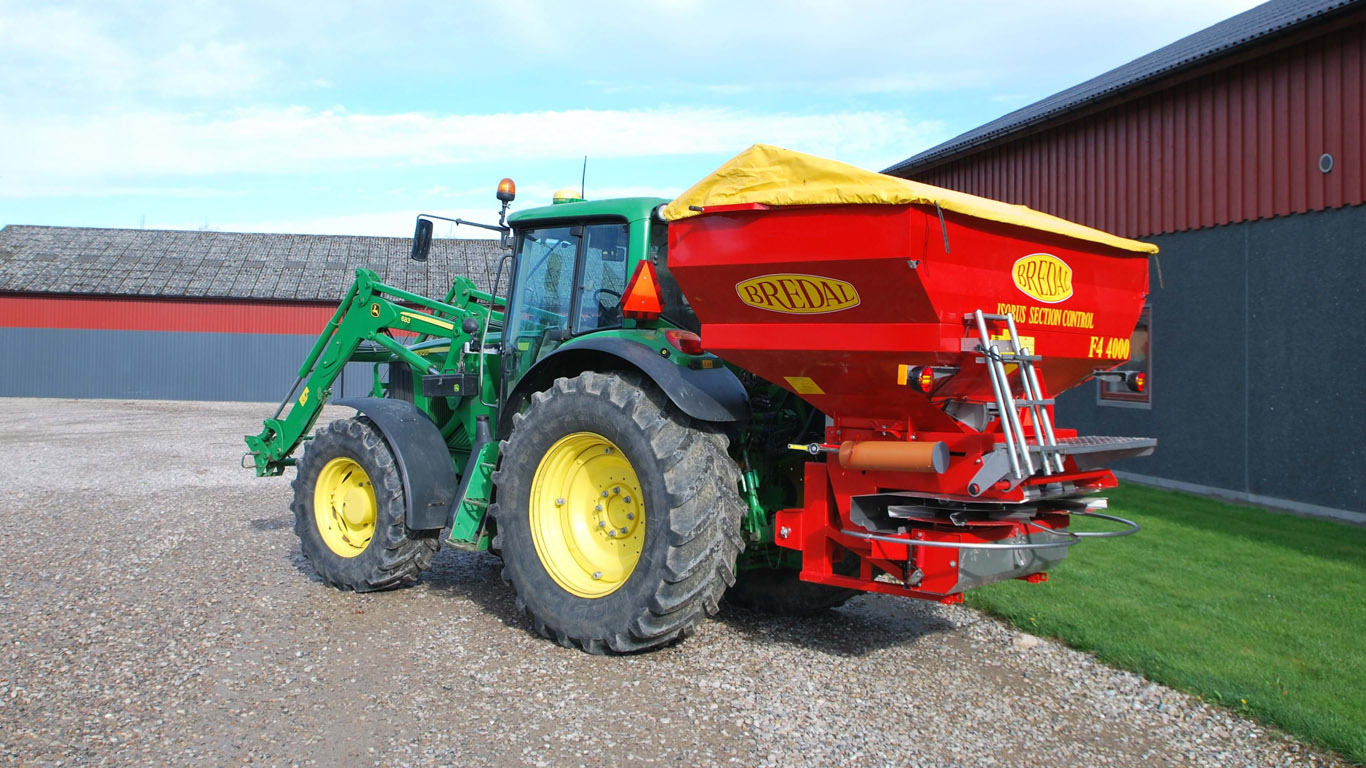 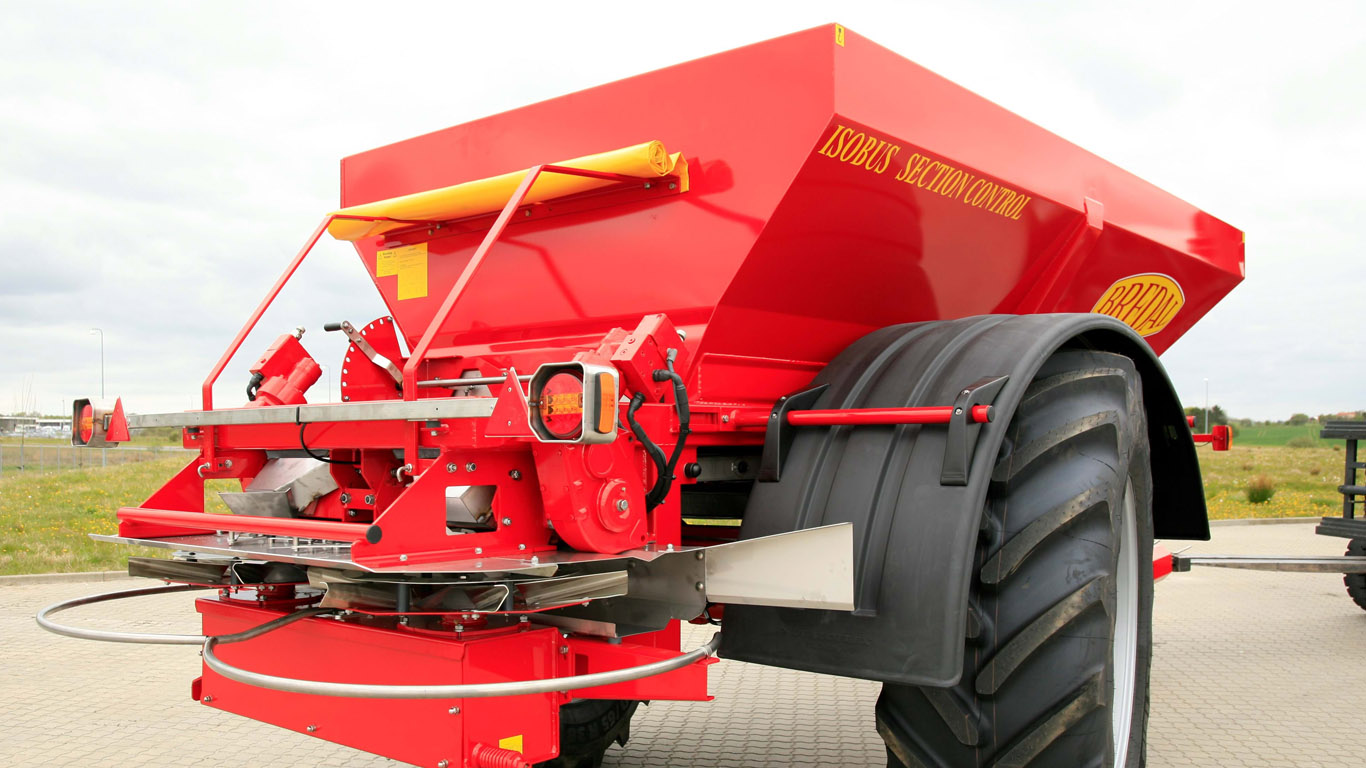 The BREDAL F8 and F10 are Bredal’s specialized fertilizer spreaders for professional use where efficiency and profitability are vital. These models are designed to meet the different requirements for graduated fertilization, border spreading, wedge spreading, leftover area spreading and automatic starting and stopping in the headland.

The trailed fertilizer spreader is prepared as standard for ISOBUS with newly developed, thoroughly tested software. Other standard equipment available for the F8 and F10 includes “A” discs for spreading commercial fertilizer, a SPC4500-1 spreader unit with 24-36 meter headland gear for headland spreading and standard spreaders are also equipped with section control.

The F8 and F10 can be equipped with weight cells, which enables the spreader to control the application rate itself and ensure that it is correct in relation to the preferred volume entered.

Another standard feature is a built-in tilt sensor which regulates the application rate in hilly terrain.

The spreader is constructed with two separately controlled floor belts, so it is possible to apply different amounts on the right and left sides.

The two down chutes which place the fertilizer on the two spread discs are individually controlled on the right and left sides. This makes it possible to optimize the spreading pattern for varying working widths and application rates.

Automatic flow correction is incorporated into the downchute control software so the downchute position automatically adapts to the actual application rate. In practice, this means that the spreading pattern will not change, regardless of whether a small or large volume is being spread.

The F8/F10 is available with either a red-painted hopper or a stainless-steel hopper, and various tyre mountings and track widths are available.

For over 20 years, Bredal “K” series spreaders have set the benchmark in agricultural spreader equipment. Capable of high capacity processed and unprocessed dry spreading incorporated in one machine.

Bredal’s K-series is a range of trailed combination spreaders that can be used to spread multiple materials, depending on the equipment you choose.

The K-series range are spreaders with multiple possible uses and can spread materials such as agricultural lime, fertilizer, sand (top dress), compost, potash, pulverized material (with mounted spreading auger) and several other types of material. Thus, with the right equipment, it is possible, among others, to use this model as a sand spreader for top dress.

A full-width floor belt ensures constant feeding of material to the two large spread discs which spread with a quadrupled overlap.

The K series was developed with a focus on a sturdy design for high reliability, ideal operational stability and strength.

The K series is available with either a red-painted hopper or a stainless steel hopper, and various tyre mountings and track widths are available. 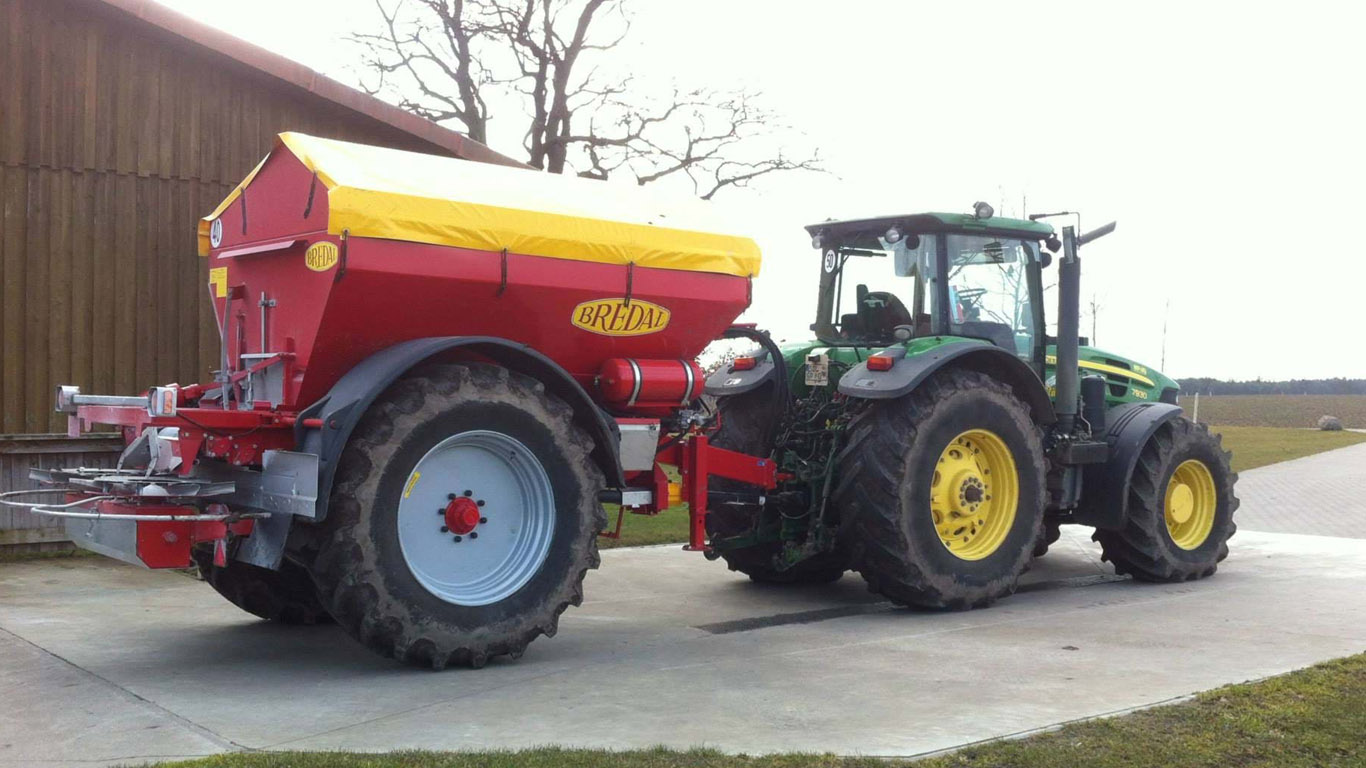 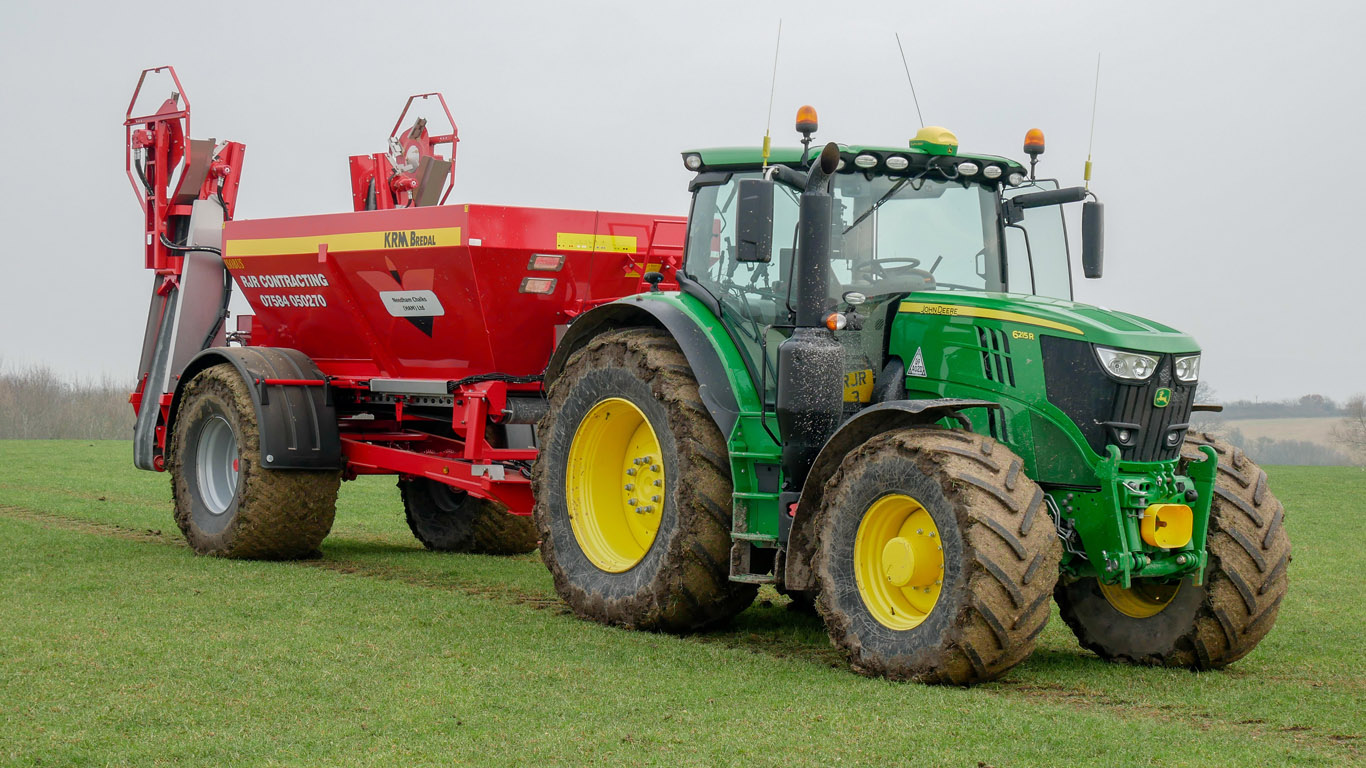 The K-XE series is our largest lime and fertilizer spreaders with arguments that speak for themselves:

Bredal’s K-XE models do not have fully integrated spreading in wedges, headland spreading or section control. These features are available on the K-XE/SC models.

The K-XE series has a built-in tilt sensor as standard that adjusts the dosage when driving on uneven terrain. Moreover, weight cells are available on all K-XE models.

The K-XE spreaders are controlled via ISOBUS. It is possible to use either the tractor’s ISOBUS terminal or an optional Müller Track Guide III terminal.

The K-XE models are available with two different hydraulic systems: